“Spring has returned. The earth is like a child that knows poems.” – Rainer Maria Rilke.

March. March, March. The word sounds like spring. Like hope. Like the smell of thawing earth. The smell of renewal and something you can taste coming to an end. That was the way I began one of my most ‘liked’ blog posts. I’ve puzzled over the popularity of that post that was a simple tribute to spring, but I must have done so wrapped in the warmth of summer, or delighting in the first blanket of snow changing a dull brown yard to a magical white one, because if I’d thought about it at this stubborn time of year I might have grasped why it garnered so much attention. Its easier to understand its popularity today, and yesterday… and all the frozen days before – in this winter that refuses to give up its grasp. 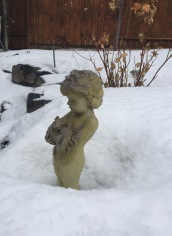 As a collective my friends and family and even strangers around me are pleading that this March weather let go. The temperature rises from minus sixteen to minus eight and we want to cast off the heavy coats we are tired of, to turn our faces toward the afternoon sun ever so hopeful. There are still piles and piles of snow to melt before the hardiest crocus has a chance of pushing out of the earth. So maybe not this week or next but soon the words of this long ago well ‘liked’ post will come into play again:

Spring with a promise, just a promise blowing in the wind, of buds pushing out of the ground, of light cleansing rains washing away the sifting dirt of winter, of a neighbor reporting the sighting of a good luck robin, of a hard crust of snow melting in an afternoon, the winding hose left out during a late October blizzard appearing again. Birds sing in the morning and sound lighter, water drips off the roof and a cat meows in heat. I swear people too are more animated, slightly off balance with the extra light and sense of coming out of the dark, having made it through the long nights. March – skip past us, deliver us to the newness of another season.

For years I’ve harbored a dream that I recently imagined I was unbelievably close to executing. Not a word had been posted on my facebook (didn’t want to jinx it) until hours before I was to relish the experience.  When I was a little kid, probably about four years old, my mom, busy with five children, had my older brother and sister take me to the local outdoor rink – back in the good old days when kids could take kids someplace fun. Big Sis got my skates on me, tugged me onto the ice, and directing my brother to take my other hand, they coached me, “One, two, three, glide. One, two, three, glide.” It’s all brilliantly sharp in my memory because I loved it. I mean, I really loved it.

Living in a land where winter snow and cold stretches on and on, I made absolutely certain that my own four kids, Zoë, Cole, Hudson and Lily could skate, so that swishing around a rink with red cheeks and cold toes was a joyful part of the long season. They’ve  left home now, but I’ve continued to lace up and pleasure skate, sometimes with family, sometimes with a good friend, other days just as happily alone, delighting in that push, push, glide across the ice on a crisp winter’s day. And I had a skating dream – the nation’s capital, in Ottawa, Ontario, attempts each winter to maintain the Rideau Canal that runs through the city as ‘the world’s longest skateway’ – how amazing – skating almost eight kilometers through the heart of a metropolitan center.

It was late in the skating season, but I’d travelled east to assist my sister after she had surgery on her knee, the same sister who had helped teach me to skate. Opting for another traveling ‘first’ I took the train from her home in Toronto, and journeyed four and a half hours north to Ottawa. When I arrived it was cold and dark, but still the weekends possibilities stretched out before me. My husband had flown in to meet me, and sharing a meal in the hotel lounge, where guest’s chatter blended with nostalgic tunes from the piano bar was first on our agenda. I only briefly considered slurping down a bowl of soup, dawning my warm clothes, casting off my sleepiness and hitting my stride with my man – who’d reported seeing hardier skaters gliding over the ice beneath a flurry of new snow.

Waking the next morning so ready to pursue this ice skating dream, I recall feeling sort of jittery. Looking out the window and seeing that snow had turned to rain didn’t squash my anticipation. Even as my husband and I ate our quick breakfast we both imagined that, though it would be less comfortable for us to skate wet, a little water on ‘frozen water’ couldn’t squash our skating trip down the winding canal. We’d been informed that to add to our skating comfort there were warm-up shacks every two kilometers and booths selling hot chocolate and warm Beavertails (squashed cinnamon-y doughnuts).

It wasn’t until we walked, skates in hand, to the first entrance to this world’s largest skate way and saw the closed black iron gates and signs warning against going onto the canal did it dawn on us that the canal – open to skating the previous evening was now closed up. Below us the canal looked a sorry state with water puddling over the slushy surface, and piped-in music still playing from somewhere near the empty change shack and closed hot chocolate booth.  A helpful citizen directed us to something grandly called, The Rink of Dreams, a small outdoor rink, kept frozen in some mechanical way. We took a few slushy circles around it as a poor consolation along with a half dozen other disheartened skaters. It just wasn’t the same swoosh, swoosh, swoosh over a long distance of discovery that I’d dreamed of. My good husband stayed cheerful buoying my soggy spirits. “Don’t despair,” he said, buying me a warm Beavertail. The temperature is dropping to nineteen below tomorrow. You’ll get your skate in.” 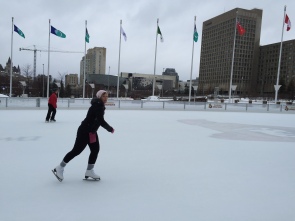 Let’s face it, you’d have to be in that situation to be holding your breath and hoping for the temperature to drop to freaking nineteen below – I mean, seriously. We shared a meal with charming friends that night and hey, I know what a lucky woman I was to just be so far from home with my supportive man and good people we care about. Still when we came outside again to icy sidewalks and had to tuck our hands deep into pockets I grinned at the cold night. By now we were well acquainted with the City of Ottawa’s website detailing the conditions of their famous canal.  I even got chatty with a staff member that told me, quite honestly, that it was touch and go at that time of the year, though he added, just the previous season the canal had been open a record long sixty consecutive days.

We explored the city in the deep chill, following our friends in out of the cold to browse international art collections in Ottawa’s stunning National Gallery. My husband, still eager for me to do this, encouraged me to stay another day while he went home to work obligations.  I kept my chilly fingers crossed, indulged in another sweet crusty Beavertail, thought about dreams and how we feed them, and with enough hours to skate before my flight the next day checked the city web site again – damn. I’d missed the season, the ice conditions had deteriorated too much to rectify it so late in the year.  My canal skating dream was dashed.  Before hailing my cab I texted my four kids with the big lesson I had learned, “When you have a dream that is weather dependent and you arrive in the place to pursue the dream, you should pursue it immediately.”  Such is life, I came home determined not to pout, and immediately bought a basket of bright spring flowers for the kitchen – blue, pink and yellow primulas.  Winter was ending. It was time to herald spring. 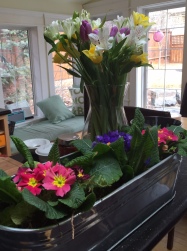 March. March, March, March. The word sounds like spring. Like hope. Like the smell of thawing earth. The smell of renewal and something you can taste coming to an end. A close. With a promise, just a promise blowing in the wind, of buds pushing out of the ground, of light cleansing rains washing away the sifting dirt of winter, of a neighbour reporting the sighting of a good luck robin, of a hard crust of snow melting in an afternoon, the winding hose left out during a late October blizzard appearing again. Birds sing in the morning and sound lighter, water drips off the roof and a cat meows in heat. I swear people too are more animated, slightly off balance with the extra light and sense of coming out of the dark, having made it through the long nights. March – skip past us, deliver us to the newness of another season.