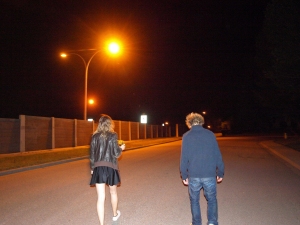 Ancient writers believed that the mother bear continually licked her little cub until it took shape. This was considered to be the very essence of creation, and as a result the Greeks and Romans referred to the bear only in the feminine gender. In the classical world of 40,000 years ago, the bear appeared as a goddess wearing a bear mask, the very symbol of the great mother of all creation. www.bearden.org The Bear Facts You have babies.  You raise them.  They leave.

“Just one more,” I said in 1985, (and 87, and 89) until I was surrounded by babies and toddlers and a wise little five-year-old.  Their needs took care of my needs.  I wasn’t one of those young girls who said she wanted a big family.  Sure, I wanted kids and I wanted a career, like every other independent thinker in my feminist studies class in first year university in 1979.

I was twenty-four when I had Zoë.  They say twenty-four is the new eighteen.  By that standard mine was almost a teenage pregnancy. My husband, Will, was in the last year of an undergraduate degree before three years of law school.   His student loan coffers were being supplemented by my big-bellied waitress gig and a future plan to write the great Canadian novel with the expertise of my Creative Writing degree, while our little one napped. Need-less-to-say I wasn’t writing novels after the arrival of Zoë knocked our collective socks off. It was a heroic feat to keep my eyes open, shower periodically, tend to every last one of her little baby needs and get over any lunatic earth mother intentions, such as homemade baby food (as pretty as it looked in the jars). One afternoon, I watched a couple past down the street holding the hands of their small boy and swinging him happily off the ground between them.  That looked just right – two adults, one child, a nice montage.  A week later I was pregnant with my second baby.  Our family would make a slightly bigger mosaic.

Cole was, and still is, the polar opposite of his sister Zoë.  At nine months he was running figure eights around the three of us.       It sounds flaky, but during a desperately needed weekend escape from two toddlers, looking out at the starry night from inside a spooky Waterton Lakes Park hotel, I told my husband we can discuss whether or not we should have a third but I just know there’s another one waiting to come to us. Hudson, baby number three, was the catalyst for my searching out books on getting organized.  It was clear that I was in over my head when I began pouring cereal into their bowls the night before to save me the trouble during my almost comatose mornings.

At the tender age of only three-and-a-half Zoë was a big help with her two brothers, but I was falling behind the eight ball with some mothering details.  On one of my I-can-only-open-one-eye mornings I found her at the fridge helping out by filling Cole’s bottle with milk and getting another bottle ready for herself.  If I had missed introducing Zoë to the sippy cup in my overwhelmed-by-children state what else had I neglected?

Blam.  It struck me.  I know what I had neglected.  I had neglected to give Zoë a sister.       Will was admitted to the Alberta Bar to begin his career as a lawyer, and I should have been admitted to the loony bin for not being content with our familial montage until it was made up of – me with new baby, Lily, in the snugli, while somehow two-year-old Hudson, the cuddler, still bumped along on my hip as Cole ran circles around us, and Zoë helped push the empty buggy.  There were still moments in the shower for years after where I debated whether or not I could accept that I was finished with babies – the teeny soft heads, and chubby feet and that spot under their wobbly neck that felt so sweet, their gurgles, and sugar breath tucked into our bed with us – could I be done with all of that?  It was telling that these moments of longing for more ‘baby’ occurred in the shower, being that was the only place I had time for reflection.  Four was enough.  Perhaps some Catholics, and certainly Mormons still have more, but I couldn’t say my family size was faith based, though a certain amount of faith was required to maintain my belief that I could manage my foursome.

Stick with me – I’ll be back Mondays and Thursdays – with further excerpts from the book project – Text Me, Love Mom – A journey to the day I found myself  still pining over the firstborn’s swift departure, and only starting to see the humour in the second’s being held at the Canada/U.S border with all his belongings in a plastic garbage bag, at the same time confused about whether it would be a positive or negative for our third child to enter an ashram, when our youngest, a sensitive homebody, asked if we’d allow her, at only sixteen to do a high school exchange to spend five months in Travestere, Italy.   (She’d already filled out the papers.)