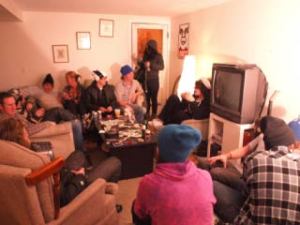 Two weeks shy of his eighteenth birthday our eldest son landed his dream job. Whistler Blackcomb resort had held their hiring fair in November, but warned potential staff that they wouldn’t actually be working until there was sufficient snow. After spending his meager savings on the flight west and accommodation while waiting desperately for snow, Cole found himself with the highly sought after position of liftie, or as he stated in subsequent resumes he was responsible for the safety and operation of the fastest upload capacity lift in North America. Our ecstatic boy was able to snowboard from the small apartment in staff housing that he shared with two strangers from Quebec, to his position at the chair lift, stationed at the top of the mountain.   He was so high up that he actually had cell service, nothing else was interfering with the signal up there, and he would occasionally call me before the first skiers showed up.  “Mom it’s sweet up here.  The sky is pink, seriously pink, and I can see over half a dozen mountains.  It’s cool.”

“Should you be on your phone?”

Cole called often in the beginning, justifying his need to make contact with some request, could I send Cd’s he left behind,  or he’d make an appeal for super warm gloves from a camping store.  Other times he would call and ask to speak to his brother, and eavesdropping I realized he was sharing the wilder aspects of being a liftie that I wasn’t privy too.   At the same time that he gained a few dozen new friends his cell service became less reliable.  I’d interrupt him trying seven-twenties in the snowboard park, his friends shouting in the background, or at a party any night of the week, a rapper rhyming nearby.  “Sorry Mom, I think I’m losing you,” he’d shout.

“Everything’s cool, Mom.  You’re breaking up,” he’d say and I was supposed to believe he was out of cell range when he lost me.

Yet as the winter carried on, working alone at the top of the mountain got lonelier, and the nights, in contrast, were perhaps too chaotic, if that were possible.  Cole came home in the early spring determined to save up for one more adventure.  His job, bussing tables at a popular bar on Calgary’s now famous Red Mile, was cut short by an Easter snowboard accident that left him with a cast on his arm and time to contemplate his new fascination with Buddhism.    Despite his Buddhist teachings he was distraught.  His year hadn’t gone as planned.  He had the itch to further his travels.  He wanted to be able to work despite the broken limb.  He suddenly ached to return to the freedom he’d known on the slopes of Whistler Blackcomb, which while not Belize, or remote Chili, represented a Mecca of sorts for him. It was there he’d first lived on his own, amongst a community of his peers, and there that he’d escaped the confines of his parents rules and learned to make a bean and rice wrap.

Never-the-less, with his one good hand he typed up the application to university in our hometown of Calgary.  We held our breath.  He talked more of Whistler, of the power of the sunrises over the peaks, of the new friendships forged.  Forward, we had whispered into his ear.  “Talk to your big sister Zoë.  Zoë loves being a student again.” (Of course, Zoë always liked being a student.)    “Try university.  Study whatever you think you’d like.  The boy/girl ratio is two to three.”  (We were desperate.)  “You did Whistler. You worked.  You broke your arm.”  Of course, all the while we wanted him to believe he was coming to the decision himself.

He sat in the sun on a summer’s day and chose courses – an eclectic array of mind expanding areas of study.  Still he wondered whether he shouldn’t take more time off, make the gap larger – let it turn into not a gap but a chasm, an abyss, a gorge … 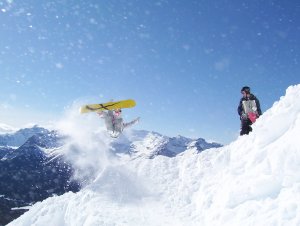 He thought the three day university orientation would be lame, but instead it was cool.  The way he went on to Hudson, who was beginning grade eleven, about the kids he knew and the tight barbeque and how he, Cole, (the guy who would switch from general studies to film production) got on an outdoor stage at some point and addressed his peers, you’d have thought I’d slipped him twenty bucks to influence Hudson to earn the marks to get there.

I drove Cole to his first day of university (how could I refuse?).  On the way up I told him I was proud of him for reaching this milestone.  “I guess,” he’d said, adjusting his hat.  He’d picked out his first day ensemble the night before. The look was casual with a hint of mystic – a 1940’s style gangster hat and 1970’s aviator classes, his dad’s  plaid shirt from some other decade, his brother’s jeans from this decade, and his very own new running shoes.

We pulled into the campus behind a line of cars driven by this generation of hovering parents.  I tried not to say too much.  Cole gave me a big grin before skateboarding away from me, asking directions from the first friendly looking girl he spotted on the fly by.  For a few minutes after he disappeared from view I let the car idle before driving off.  We’d done it.  We had made it through Cole’s gap year.  So why then couldn’t we trust our instincts when it was Hudson’s turn to have a gap, instead of leading him down the path to a trying experience?